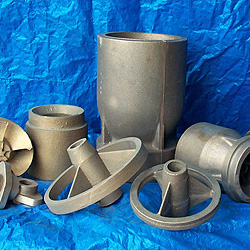 The Process of Metal Casting and Why Mould Matters?

Negative impressions form the backbone of the metal casting industry. We'll hold off on listing the various mould materials for the moment, mostly because we're talking at a building bricks level. It's a spotlight we're using today, and that spotlight lands squarely on top of moulds, for no casting could be produced without these parts-fashioning hollow impressions.

Everything begins with a concept, an outline that's made with paper and pencil or a CAD (computer aided design) program. This is where we work with the "pattern." Simply put, the pattern is a geometrically accurate representation of the final product. It's a replica, a form that's made from wood or plastic, metal or some other malleable substance. Machine workshops make patterns, as do artists and 3D printers. This is the originating positive profile, the volumetric outline that's used to shape the mould.

Remember, the mould is used in metal casting as a container for liquid metal, but it's also the negative shape created by the pattern, so what can we conclude from such dual-function aptitude? Moulds matter more than any other part of the manufacturing process, for they imbue amorphous volumes of liquid metal with shape. And we're not just equating the process with a primitive outline. Contemporary moulds use enhanced engineering processes to add intricate geometrical features to their reversed outlines. Finally, inserts are added to this liquid-hot mix, supplementary shapes that are referred to as cores. They're the internal voids within the metal parts, an internal feature that, unlike the pattern, remains in the mould during the pouring phase.

The mould is physically crucial, for it represents the culmination of many casting-oriented disciplines. The two halves are now fully endowed with the inverted shape of the product, plus the cores are in place, but we're not done quite yet. A gating system needs to be fitted. Gating is a mechanical interface between the liquefied alloy and the hollow void within the mould. It incorporates a pouring basin, gaseous venting apertures, and runners, the parts that guarantee the smooth and uninterrupted flow of molten metal.

The progression of parts-developing engineering goes in a mostly linear fashion. Concept is followed by pattern creation, which is then accompanied by the transition of the pattern into a reversed replica, an outline that shapes the internalised features of the hollow void. Gating and cooling conclude the cycle, leaving the part to be ejected and pushed forward into a post-processing or finishing station.