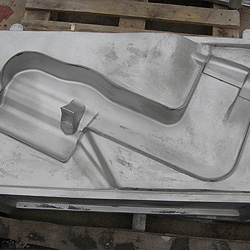 When a developing product leaves the drafting board, the prototyping phase allows engineers to evaluate features and generally fine-tune the concept. The Rapid prototype aluminum casting process works along the same lines, with the non-ferrous metal finding itself shaped into a basic outline that simulates the functions of the end product. The goal is to provide proof of concept, a part that works but does so without employing a complex tooling cycle.

Short-run patterns are fabricated to simulate the primary features and dimensional measurements of the concept, which means the prototype must be functional, must be a part that can handle the stresses and duties allocated to the eventual final part by its intended application. Investment casting techniques fulfill this mandate by using state-of-the-art waxes and resins to create a geometrical profile that satisfies prototype design specs.

Computer aided design software suites are often used to produce the initial prototype. The file is easy to modify within its own computer space, so it's obviously helpful when a rapid prototype aluminum casting process can adopt a portion of this spatial transforming prowess. The prototypes are composed in 3D and saved before being transferred to the pattern-making station, a phase where the simulated part is generated in wax, sand, or resin, and coated in a fine layer of ceramic.

The Toughest part of the work is to produce a component that can be validated as a working product, but, at the same time, tooling costs and the number of modified prototypes must be kept low in order to adhere to a cost-effective parts-simulating process. The pattern uses easily destructible sand and wax, ceramic and plaster, to manufacture the component as something that can be evaluated for functionality. The foundry, in effect, is determining form and feature over productivity, which equals a low production environment, but it's an environment that's also dictated by a versatile modification methodology. In essence, the pattern created by the casting facility is sourced from a modifiable computer file, so the pattern-making material must adopt the same versatile transformative properties.

Detailed geometrical profiles are generated by CAD packages and dispatched to a foundry design department via electronic means. The intent is employ the rapid prototype aluminum casting process with an inbuilt element of alacrity, so the affordable material used in the pattern must work in tandem with an adaptable casting service, a prototyping technique that is able to quickly bridge the concept-to-reality barrier.