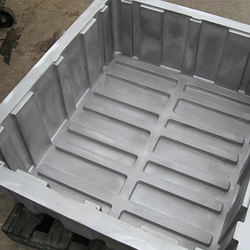 All through prehistory, we've told tales of Vulcan and Hephaestus, the Gods of the volcanoes and the foundry. They were the mythological figures that caused the thunder to crack because they were hammering new weapons into shape for immortal warriors. We stole the fire and created our own foundry industry, turning base metals into bronze and purifying deposits of iron ore so that toughened farm implements and battlefield weapons could be forged. But what is a foundry? Arguably, we could call the first mud hut with a metal working workshop a foundry because it used bellows made from animal skins to blow hot air across copper and silver, thus making the metal soft and workable. But a true foundry is more than a primitive furnace, no matter how talented the metal worker.

Look to Mesopotamia and the arid regions of Iraq and Syria. This is where the foundry and the furnace were born. Clay castings and hot fire pits partnered to melt and shape copper, gold and silver. Intricate three-dimensional forms were now possible. These primitive foundries worked copper and melted the metal to create more complex forms, but it wasn't until tin was added to the mix that metal working took off on a beeline toward the future. The addition of tin lowered the temperature at which the two metals melted and formed bronze, our first alloy. Wax casting and fired clay enabled the hands of a craftsman to now make an object and eventually see that object rendered in bronze. Weaponsmiths and artists alike were paying close attention at this point.

Settlement permanence and mining competence grew as the centuries passed, leading to the substitution of a greenish-brown ore in place of reddish-brown copper. Iron ore combined with the development of casting know-how to throw clay-carved moulds into the slowly evolving foundry industry. Blacksmith shops opened on side streets to work on the farm tools that seeded food in the settlement fields, and the weaponry field placed kings on thrones as their subjects mastered the production of tempered iron swords.

It was a coming together of all of these ancient lands that created today's foundry industry. Manually operated bellows and pipes gave way to steam-powered pistons and massive furnaces full of molten iron. The industrial era needed iron, and engineering science was not to be denied. Huge electric motors and banks of fans now force the air into twenty-first-century furnaces. New alloys, aluminium and steel among them, flow from induction furnaces and arc models to pour the molten metal into computer designed castings, leaving no element of the process to chance.