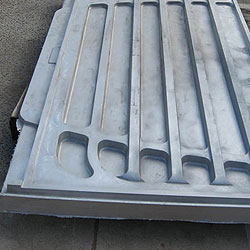 The goal of this clash of the furnaces is to create a differential review, a critique that looks closely at electric induction versus gas melting as it relates to aluminium alloys. Both heat sources exude inordinate amounts of thermal energy, but they use very different firing processes to achieve similar results. It's round one in our battle, so where do these melting processes diverge?

Electric Induction is the Contemporary Standard

The workpiece in an induction furnace rejects the flame in favour of an alternating electrical current. Inductance energy generates magnetic fields and promptly converts the high-frequency magnetic field into thermal energy. Nothing is wasted in this efficient setup, with the crucible fully leveraging every iota of energy thanks to the special refractory material coating its surface. Subsequently, the aluminium alloys melt quickly, are further mixed into a homogenised pool by the electromagnetic field, and energy costs are streamlined while localised alloy melting proceeds apace.

Extolling the Virtues of the High-Powered Gas Flame

The gas melting of aluminium alloys uses a raw flame powered by fossil fuels. This gas (typically propane), is cheaper than other fuels but not as energy-efficient as a fuel-less electric induction solution. Additionally, the flame is tunable, in that it can be finessed until heat exchange is maximised, but there will always be losses. Crucible conductance and material convection represent the bulk of these losses. Conversely, the induction melting method uses a number of powered coils, so localised melting is entirely possible.

The Castings Champion Depends on the Application

In concluding this study, a fracas that pits electric induction technology against gas melting, the winner is defined by the application. For example, purity is a major concern when aluminium alloys are being processed. The flame model is relatively efficient, but it's known to introduce dross and layers of contaminants, including oxide films. Worse yet, gas melting introduces uneven heat distribution, so hydrogen porosity and other material weakening defects proliferate. Fortunately, induction melting fosters contaminant-free liquefaction while simultaneously providing enough electromagnetic impetus to mix the molten pool and uniformly imbue the molten aluminium with heat.

The debate ends here, with the eddy currents of the induction crucible besting the gas melted model in terms of pure energy efficiency. Gas melting is still a powerful melting solution, but it's not an effective method when a purified molten aluminium source is needed for a high-end castings project. Clean and eminently efficient, that's where the induction method excels.