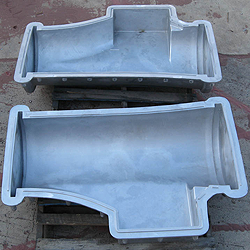 Instead of aimlessly pointing out the most common alloys used in die casting technology, why don't we apply some intelligence to the matter? First of all, the technique favours non-ferrous metals, so walk that pointing finger over to aluminium. Next, use the material profile of this lightweight alloy as a launch platform. That way, we get to highlight other popular non-ferrous candidates.

Up Front with Aluminium

A broad range of die formed products speed off the manufacturing line when this mainstream metal is selected. The base metal is light and relatively corrosion resistant, but it acts unpredictably when it's subjected to high temperatures. Casting shrinkage is a problem, as is cracking. These problems are eliminated by binding aluminium to magnesium, silicon, or copper.

Patroned by many customers and even more applications, copper alloyed objects are as aesthetically attractive as they are corrosion proof. Statues and facades employ the former attribute, but the latter feature is often reserved for plumbing applications. Beyond this domestic stereotype, the copper die casting process is used to produce marine-oriented products, parts that can resist the ravages of salt water.

A superior strength-to-weight ratio partners with an innate set of structurally-capable attributes to create a formidable candidate for casting. The metal bonds effectively with manganese, zinc, and other members of the non-ferrous casting family to address several engineering issues. Primarily, the alloy readily hardens when employed in thin-walled usage areas, so it's commonly used in portable electronics. Expensive cameras and high-end smartphones enjoy this feature. Large and complex engine parts use slight variances in this formulation, which means forgoing ductility. Tough structural builds take over, thus leading to robust engine parts and fatigue-resistant gears.

As the other alloys fill the higher and lower ends of the castings spectrum, zinz-based alloys spread uniformly across the broadened scale. Indeed, the gamut covered by this well-known metal envelops both the base metal category and the additive classification. Zinc is a hard metal that alloys readily with many of the above metals. It's also added to aluminium and other non-ferrous elements as a hardening agent.

Certain iron-less metals form the heart of the die shaping family, but the most common alloys in die casting imbue the process with intelligence, thus adding tailored characteristics to an already formidable set of mechanical properties. Additional material properties include surface finishing improvements, machinability enhancements, and an ability to withstand corrosive environments.