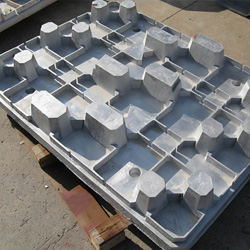 Illustrating the Basics of the Moulding Process

A finely detailed metal component doesn't just rolled off the foundry floor. The metal is first melted in a crucible and poured into the cavity of a mould. It's this mould that shapes the cooling metal, granting it its final form. Moulds are actually reverse images of the metal product, as they're formed from open space, a small void in the mould that's waiting to be filled. The original "pattern" used to shape the cavity is produced from wax or wood, metal or some other easy to manipulate material though modern methodologies now use 3D printing machines and die casting technology to form highly detailed, geometrically accurate patterns.

It's Not as Simple as it Sounds

A modern foundry is a hotbed of coke and coals. The furnace works 24/7 and the moulds have an incorporate gating system, sprues and gates and risers, to guide the liquid metal and act as heat sinks. Electric induction ovens and superheated gas burners keep mammoth foundry lines active and metal flowing. The moulding and core making process produces engine components and complex assemblies that are built from the finest alloys. Intricate planes and sweeping contours vie for dominance with bevelled edges and helical profiles.

The contours of a casting can't always be formed from a straightforward mould, not when intricate shapes and planes are in evidence. Instead, a core insert made from disposable silica (sand) is inserted into the cavity. At the end of the process, the core is broken up and removed from the casting. Crude core inserts are used for holes and small internal contours that can't be reached by a standard moulding cycle, but imagine a complex example. The engine manifold of a new automobile, for example, uses the mirrored internal geometry generated by the original pattern to inverse, shrink and otherwise create the core moulding component for the casting.

The moulding and core making process form the casting, but the core is an inversely proportioned replica, a creation that answers only to the internal geometry of the final product.