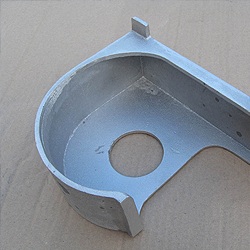 Differences between Shotblasting and Sandblasting

The engineering labels employed here make these terms sound aggressive, explosively so, but the differences between shotblasting and sandblasting actually only refer to a surface finishing process, not a battlefield weapon. In straightforward terms, a language that our non-techy readers can decipher, the former process is an abrasive cleaning technique, but so is the latter method, so what's the difference between the two techniques?

Shotblasting uses an energetic stream of steel particles to ablate surface contamination. It's tempting to say the processed part is being cleaned, but ablation is a more descriptive term, at least in this instance, for the blasting stream of steel particles absolutely obliterates everything, including rust and paint, until the processed part is completely exposed and ready for more post-finishing work. Conversely, a sandblasting station uses pulverized silica to surface clean parts. The size and coarseness of the silica determine the cleanliness factor, as we've already described. Interestingly, both cleaning techniques go beyond mere cleanliness, so let's talk about surface treatment technology.

Shotblasting Strengthens While It Cleans

A turbine accelerates the steel shot until it bombards a worked part. It's cleaned, obviously, but it's also stressed and treated, thus classifying the technique as a material treatment process, one that enhances the fatigue strength of the part. Sand particles (silica) are equally fast moving due to compressed air, but they don't possess the same density as steel shot. Still, the sand can be selected according to its shape and coarseness rating, so this quartz-derived technique is commonly used when different surface finishes are required. The resulting part is, therefore, clean and post-processed by sand. In other words, the worked casting is judged lustrously smooth and ready for the market or, optionally, is denuded and ready for a special coating.

The differences between shotblasting and sandblasting take us on a journey through conventional post-processing territory, but what dictates these end process changes? The client's requirements count above all else, so fatigue resistance equals a call from the client for a shot blasting procedure. A rough finish with good surface adhesion characteristics, however, means employing coarse sand. A fine sandblast, meanwhile, works best for a product that's destined to be finished with a glossy reflective coating.

Employ steel shot when full surface ablation and material strengthening is the order of the day. If granular surface coarseness is the object, well, call upon a sandblasting process for this level of fine control.